In the waters of the Adriatic Sea, near the Croatian island of Biševo, an aircraft wreck was found. According to preliminary examination, it is most likely the remains of a B24 bomber that served in the region. Unfortunately, the great depth and poor underwater conditions made it impossible to get a close look at the machine and take good photos.

According to Croatian media, the find was made by a local instructor and owner of ISSA Diving Center - Sinisa Ižaković. During a dive near the island of Biševo, located 5 km southwest of the island of Vis, well known to all divers, he noticed a shape below him that at first he could not identify...

"Last month, while diving on the western side of Biševo Island, I came across the wreckage of an aircraft. The machine rests at a depth of about 85-90 metres. It is most probably a B24 bomber. Unfortunately, due to poor visibility, for the first few minutes I was not even sure if it was a plane. Unfortunately, most of the material I managed to record is not of the best quality. Now I am waiting for confirmation from specialists dealing with wrecks as to what we are actually dealing with," Sinisa Ižaković reported to journalists.

The next dives in this location are planned only for this spring and will take place at the turn of March and April. Then we will probably be able to obtain much more information on the type of the unit and its history. The most important thing will of course be to locate the aircraft number, which will open up the details of its service and the fate of its crew to the explorers.

The area where the find was made is famous for its magnificent wrecks. Of course, the largest number are vessels, whose years of sinking stretch from antiquity to modern times. However, in the Adriatic alone, about 100 downed aircraft have been located so far, mainly from the Second World War. This is due to the airfield on the island of Vis, from which allied aircraft flew into battle. Around the island itself, about 30 aircraft wrecks have been found so far, and probably more than one is still waiting for its discoverer.

*The photo shows a B24 bomber so-called "liberator" found near Rijeka in 2009. 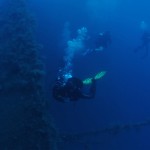 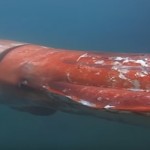 Japan: divers filmed an encounter with a giant squid - video

Drakos-Selinitsa-System - a discovery by Polish cave divers in Greece

Multifloral squid filmed in Australia for the first time